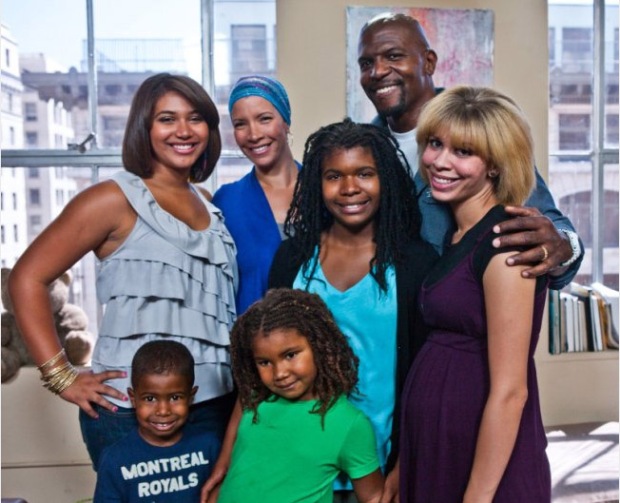 I just finished watching season one and two of “The Family Crews“, on Netflix. Although I love a well written  script, seeing this family’s reality has been a special treat. The Crews remind me a lot of the The Cosby Show , they are the new reflection of African-American family that is build on love and support of one another.

The Father of the family is the main charater, Mr. Terry Crews. I enjoy watching him take big leaps of faith when it comes to his career. Like the time when he pitched a video to a producer / friend. The producer did not want to tell him no, but eventually Mr. Crews found out that he was not interested in the idea. So, Mr. Crews did the next best thing and made a YouTube video of his vision with his families help. That man is full of motivation.  I also notice he is full of his love and respect for his family. The same energy and creativity he has for building his career is the same when he is being a husband, father and now grandfather. He goes out of his way to make sure that everyone is following their dream while he goes for his. When his family is inconvenience by any new changes, he gets creative in helping them adjust.

Mrs. Rebecca Crews, is the lady of the house.  With her faith in God and her no non-sense take on life, she is an image of a strong, classy Christian woman. I would describe her as the rock of the family that keeps the family together through prayer and sacrifces. She supports her husband’s vision no matter how grand or small, while raising 5 beautiful children. Which if you watch them closely, you will see that they are products of love and attention. I am not sure if she realizes it, but her dedication to her family is ministry in itself. She encouraged me to become what Christians say is a “Proverbs 31 Woman.”   I look forward to seeing her in the next season, taking her ministry to the next level as she balances family and career.

The children start with the oldest daughter Naomi Burton. Her biological father is Charles Burton. She have been raised by her mother and Terry Cruze like she is one of his own biological children. She became a mother in the last season and I read in an interview with Rebecca that she finally married the father of her child and they are doing well.

Azriel Crews is the second oldest, and was interesting to watch. She has a humble patience way about her that stands out the most when she deals with her younger siblings. But she has a temper as well, that she agrees she need to work on.

Tera Crews is the daughter that looks just like Terry and was named after him. He often referrers to her as his best friend.

Wynfrey Crews is the youngest daughter. She is close in age with their only son Isaiah Crews and they stay close together, whether it is to be bad or good. They are too cute.

So that is the Crews Family, their reality is shown on BET. I search for when season 3 will start, but I have not seen a date. I hope they continue with this series, because it is good television that anyone can appreciate who ever dealt with real family issues.

Sharing is the MISSI way

4 Comments on The Family Crews